EN ROUTE TO the agreed rendezvous with Agnes, Greg is distracted by the sight of campfire smoke in nearby woodland and sets off to investigate. Approaching cautiously, Greg discovers an apparently hospitable group of travelling tradesman, builders and fixers led by Ed Mason, a plain-speaking Australian sheep-shearer.

The gang's easy generosity and relaxed attitude soon convince the travel-weary Greg to lower his defences. Greg is eager to integrate Mason's wanderers into his regeneration plans, and tells them of his experiences in Norway, his travels across Britain building upon the inventory records begun by Carlson, and of the communities at Sloton Spencer and Cawston Farm. Fetching his annotated maps from his saddlebag Greg is attacked from behind and stabbed, crumpling to the floor. His lifeless body is dumped into the river as the gang's murderous nature is revealed. Mason seizes the settlement list — priceless intelligence for a roving raiding party.

Mason is infuriated to discover that Carlson's notebooks are in Norwegian, and fears the wrath of the group's leader — The Captain — on learning of the hasty dispatch of the owner of the records. The gang decide to visit Sloton in pursuit of Agnes, the vital translator of their newly acquired hit-list.

The gang squabble over the spoils of the kill, until Dave wins the right to retrieve the wristwatch from the body in the stream. Pulling at the corpse Dave discovers Greg has regained consciousness, and the would-be thief is hurled into the water. After a fierce struggle, Greg batters and drowns his assailant before crawling, wounded and exhausted, to the bank.

At Sloton, John and Lizzie spot an approaching group of riders, led seemingly by 'Greg', and Pet and Jack rush to greet him and his party. Mason informs them that Greg has been set upon by members of Dr Adams' settlement at Cawston Farm, and that he has been taken to Mason's community to rest and recuperate. Handing over Carlson's notebooks as 'proof' of the credibility of his story, Mason explains that Greg had agreed to lend him his horse and clothing. Their hosts invite them inside.

Weak and fading, Greg makes for Cawston Farm and medical attention. Passing out, Greg wakes to find he has made it to Adams' settlement, where he has been taken in and tended to by John and Jim. The pair, who claim to be the farm's only inhabitants, are evasive, insisting that stories of a community of forty-three led by a Dr Adams are false. Convinced he is the victim of another deception, Greg concludes that Adams may be being held prisoner in one of the other farm buildings.

Escaping from confinement, Greg is horrified to discover charred human remains in the ashes of a large bonfire. Greg is captured and ordered to leave the settlement in the morning. Determined to learn the truth, Greg breaks out for a second time, and locates what he believes to be Adams' cell before being discovered. Despite his frail condition, Greg overpowers both John and Jim, and bursts upstairs to free the prisoner. Yelling at him to keep away, Adams cannot warn Greg in time that he is infected with a virulent derivative of 'smallpox'.

At Sloton, the visitors' manner becomes more threatening, and their demand that their hosts produce Agnes ever more insistent. As the tension around the kitchen table rises, Chris discovers Agnes' hiding place and marches her before Mason. He orders her to complete translations of the manuscripts by the morning, or face the consequences of defying The Captain's wishes.

With Greg's resistance to the deadly infection now dependent only on genetic chance, he remains at the side of the now-terminal Adams and learns of the decimation of the once vibrant community. Adams reveals that 'smallpox' was visited on the settlement as a direct consequence of their efforts to develop trading and exchange links with other communities, as Carlson had encouraged. Once the 'smallpox' had taken hold, Adams ordered the quarantine isolation of the farm. The task of caring for the sick, and cremating the bodies of the dead, fell to the only two apparently immune members of the forty-three. Any hope that these two survivors, John and Jim, might have of finding a new settlement to join was dependent on total secrecy as to the farm community's fate. Adams diagnoses the symptoms to watch for: shivers, headaches and vomiting accompany the onset of the illness; when a sufferer bleeds from the mouth or nose, they have only a week left to live.

Next morning, Greg checks himself for signs of infection. There are none. In utter relief at his good fortune, he is preparing his horse to leave when, without warning, he retches. Under the matter of fact gaze of John and Jim the condemned man returns to Adams' quarters where they discuss their impending deaths. Adams expresses his contempt for self-pity. Greg is engulfed by self-doubt about his priorities over the previous year, and his decision to place the demands of the Carlson project ahead of the needs of his wife and son. Fired up by remorse, grief and a sense of guilt, he announces his plan to wreak vengeance on Mason's gang. To protect others from these predators, and to give his own death some meaning, he will lure The Captain and his thugs to the farm – and to their deaths. Adams cannot agree with Greg's methods but allows him to seek Jim and John's co-operation in trapping the gang, and hands him his own gun for protection.

At Sloton, Agnes remains defiant, refusing to work on the notebooks. Hoping to scare her captors, she confronts them with Dave's watch, pulled from their dead friend's drowned body – proof that Greg is still alive. Mason congratulates Agnes on giving away Greg's one advantage — that of surprise. The gang prepare an ambush and wait for Greg's inevitable arrival.

Greg evades the trap and captures Tilley and Chris. Face to face with Mason, Greg announces his plan to sign up with The Captain's forces. To the amazement and disbelief of Pet, Jack and Agnes, Greg denounces and disowns his family and community, insisting that he despises them for their weakness and stupidity. Softness, he sneers, is a luxury of the past. In the post-Death world, order and survival demand harshness and brutal discipline. Greg claims that he now recognises that his plans for reconstruction require such methods. When an enraged Jack comes too close in protest, Greg fires off a warning shot that catches him in the arm.

Mason says he is prepared to accept Greg's change of heart and accept him as a member of The Captain's team. Mason then confides to his men that this is another ruse that will allow them, and The Captain, to discover Greg's real agenda.

Making his goodbyes, Greg asks Pet to tell Jenny that he is 'following in the footsteps of Paul', a message that Pet is too angry to reflect upon. Lastly, he offers Agnes a 'special Norwegian' farewell and departs with Mason's men. Agnes translates Greg's message to the stunned audience. It is not 'goodbye', she tells them, but 'I have smallpox.' Greg's act of sacrifice and revenge is revealed. The young John stares bewildered at Greg's disappearing figure.

Arriving at The Captain's headquarters, Greg hands over his gun to Mason, aware that it is now a redundant weapon. Mason points out that Greg has a nosebleed. 'So I have', he says calmly. The group enter the settlement. The last, bitter, laugh will be Greg's. 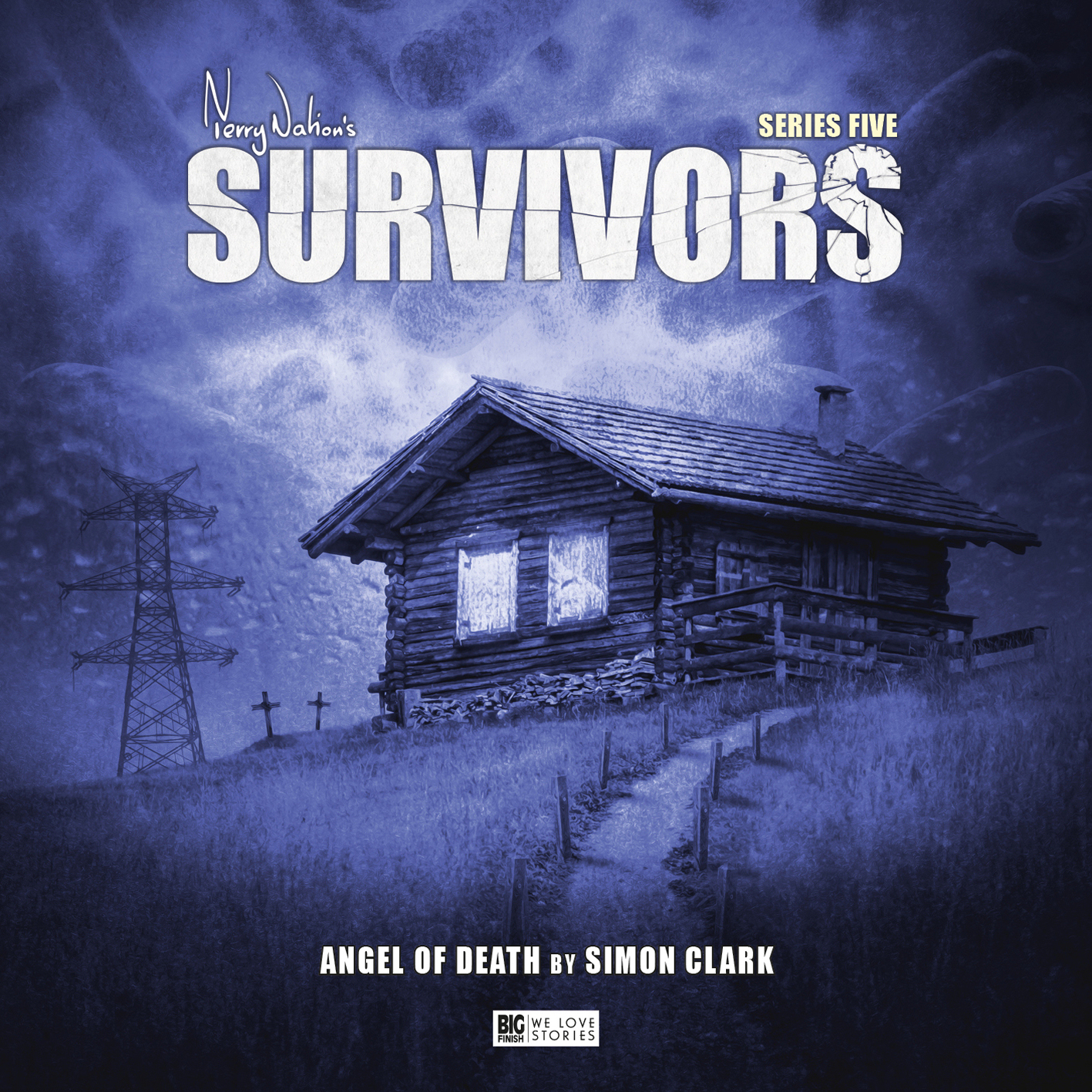 Can Abby, Greg and Jenny halt the decimation threatened by the 'angel of death' before it delivers a new dark age?