Says Seymour of finding more and more of the original Survivors cast being reunited for the Big Finish audio dramas:

it’s wonderful to meet everybody who was in the series before – the original group. A lot of the acting peers in my age group have gone. So seeing the ones that are still alive, and connecting like we did – because we were so close – is heaven.

Heffer suggests that the character of Jimmy Garland has remained:

a person who was always in the back of my head. He was very like the character in The Mad Death. Obviously he was posher, and one of the things he represented in Survivors was that sort of paternalistic view of things from an earlier era. It was a really interesting part, and one of the sort of roles that did, I suppose, often come my way. 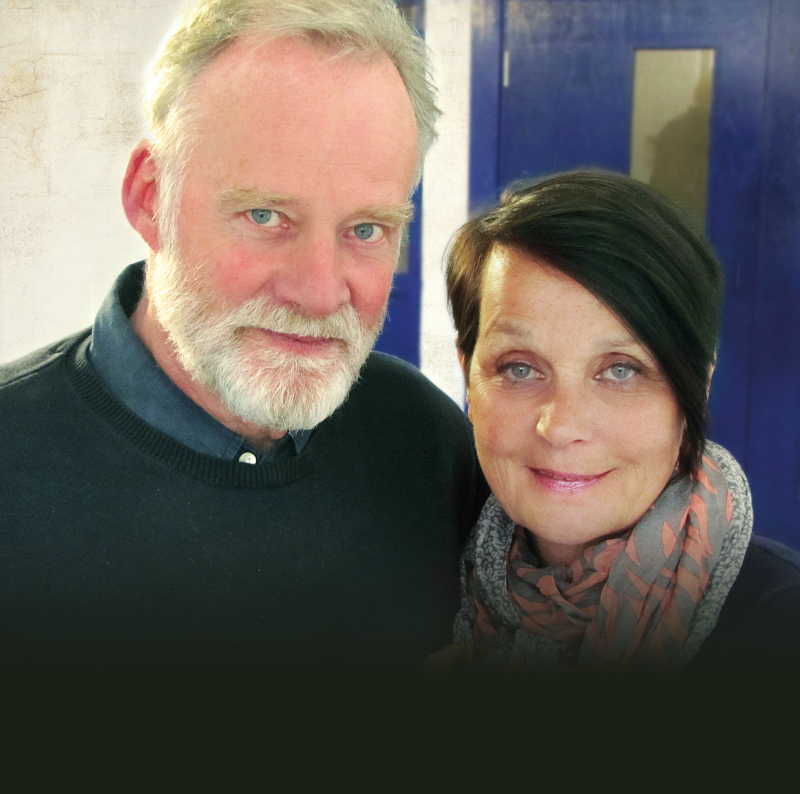 In a new and exclusive interview recorded at the Big Finish studios, Paul Thornley discusses his role as the chilling and ‘rage fuelled’ Vinnie Vincent, in series three of the Survivors audio adventures. Says Thornley of the character of Vinnie, the would-be governor of post-apocalyptic Britain:

He thinks of himself as a ‘great thinker’, and as an astute mind. He sees Abby as the same. He sees something in her, and he can’t quite understand why she can’t see it in him. “The two of us – we could be great together!” – he reckons.

In original interviews, recorded in the Big Finish studios earlier this year, Chase Masterson and Andrew French discuss their work on the third series of Survivors audio adventures from Big Finish. Says Masterson of the plight facing the character of Maddie Price:

one day in the future any of us could wake up and wish that we had back exactly the life we have today. And I think it’s a great lesson to take from the series: being grateful about what we have.

Andrew French says of the moral texture of the latest series of Survivors:

I think these stories are quite moral. If you were in this situation, what kind of leadership would you want? Would you want someone who would kill anybody else as long as you were safe? I think most people would probably say “yes”, in the final analysis. But what does that make you? I think that these are incredibly moral tales.

In a new and exclusive in-studio interview, John Banks discusses his work as journalist Daniel Connor in the third series of Survivors audio adventures from Big Finish. In the interview he reflects:

I talked with producer David Richardson about the character for quite a long time actually before even I saw a script, and the whole idea of him. We got very excited. David was already very excited with the notion of the series. When he told me about it I immediately latched onto it. I knew the TV series. And it was such an exciting thing to be involved with.

The new edition of Big Finish’s house magazine Vortex (No 81, November 2015) includes an two-page interview with actor John Banks (Daniel Connor) discussing his work on the third series of Survivors audio adventures. The issue also features some brief comments from Miranda Raison (who plays the role of Janet the new series of Survivors), who admits that: “Survivors was surprisingly dark”; and a photo showing Carolyn Seymour (Abby Grant) with fellow cast members of the new Jago, Litefoot & Strax story “The Haunting” (in which Seymour appears).

Earlier this week Big Finish released the much-anticipated third series of Survivors audio adventures! The new four-part series is available to buy in both digital download and CD formats.

Big Finish have just released the much-anticipated third series of Survivors audio adventures! The new four-part series is available to buy in both digital download and CD formats.

We’ll be posting interviews with cast and crew and reviews of all four episodes on the Survivors: Big Finish mini-site shortly!

The battle for survival continues. the third box set based on the cult television series is available now…

It begins with just a few people falling ill. Another flu virus that spreads around the globe. And then the reports begin that people are dying…

When most of the world's population is wiped out, a handful of survivors are left to pick up the pieces.

Beginning in the early days of the plague, before focusing on the survivors of a decaying London, these new plays promise to be some of the most terrifying stories Big Finish has ever produced, as we again ask the question – how far would you go to survive?

After weeks of searching for her son across a devastated Britain, Abby Grant and her allies head into London in pursuit of new leads. One of the party is quarantined, holed up with a fever. They remember the very first days of the Death, and the actions of a man called John Vincent…

A lonely voice on the radio calls out across the ether. Maddie Price is a long way from home, but not yet ready to give up hope.

When his friends' lives hang in the balance hundreds of feet above London, Jimmy Garland leads a daring rescue mission into the capital.

Down on the coast, plans are being made to reach out across the world. It could mean a new beginning for some, and the long-awaited chance to return home for others.

(Please note – Survivors contains adult material and is not suitable for younger listeners).

The first two series of Survivors are still available to order now – with the first episode of the award-nominated Survivors: Series 1 now online to download for free. An audiobook reading of Terry Nation's original novel is also available, performed by Carolyn Seymour. As with all Big Finish website CD purchases, where possible a download copy is instantly and exclusively available upon buying.

The battle for survival will continue in 2016 with Survivors: Series 4 and Series 5, available to pre-order now.

This blog, part of the larger Survivors: A World Away site, provides a news stream on all aspects of the classic 1975-1977 BBC post-apocalyptic show Survivors.

The blog offers news and updates on all aspects of the original three series of Survivors: DVD releases, new publications, appearances by key cast members, conventions and other events.

For more detailed and in-depth coverage of the series, visit the Survivors: A World Away site.

For information about the 2008-2010 BBC remake of Survivors, visit the unofficial new series blog.

For information about the new Survivors, audio adventures, launched by Big Finish in 2014, including nine boxsets, two audiobooks and the New Dawn series, visit the dedicated mini-site.